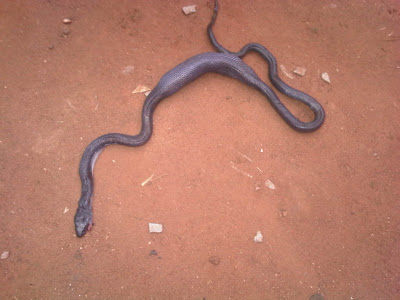 Members of the National Youth Service Corps undertaking their orientation exercise at the Ondo state camp now live in fear for their safety as a black snake was discovered yesterday in the male  hostel causing panic among ‘corpers’.

According to one of the youth ‘corpers’ who craved anonymity, “I was so scared. The safety of corps members aren’t even guaranteed. The toilets are messed up. We live like prisoners and refugees. God help us.”

Another member  said, “Government pays no attention to the safety and welfare of corpers at all. Imagine a dangerous reptile under someone’s bed.”

The snake was reportedly found and killed by the corpers in the male hostel.
at 18:38